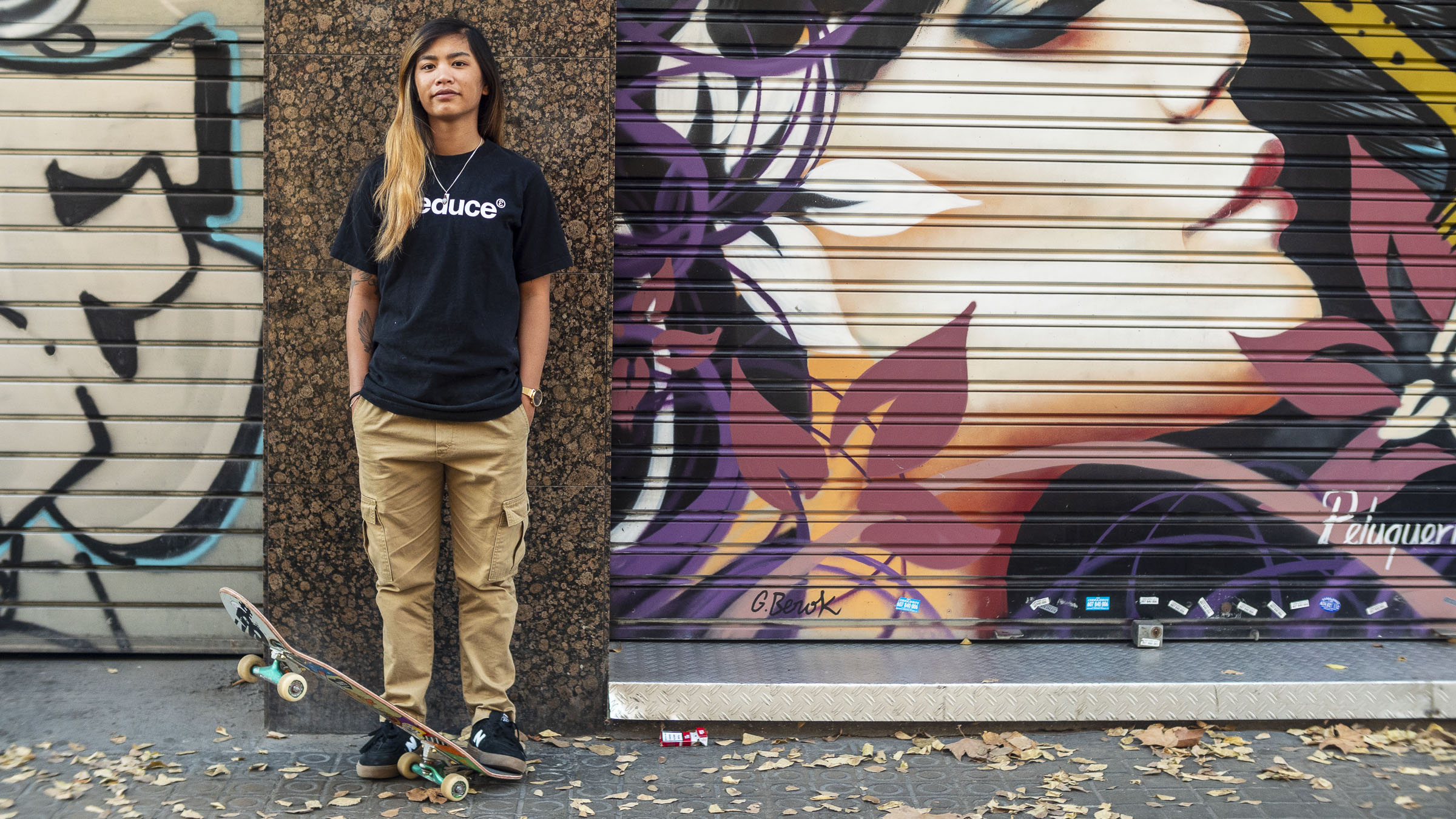 Skateboarding is on a new journey. Plowing forward along the Olympic path and creating opportunity as it goes, with many experiencing the whirlwind of international competition for the first time. Orapan Tongkong is one of the many amazing people taking these first steps. Skating for the Thai national team and with a legitimate chance of qualifying for the Olympics, she’s steadily been making a name for herself these last couple of years. While on a filming mission in Barcelona for a new Preduce project, Anthony Claravall got the goods and gives us a glance into the life of Ora. 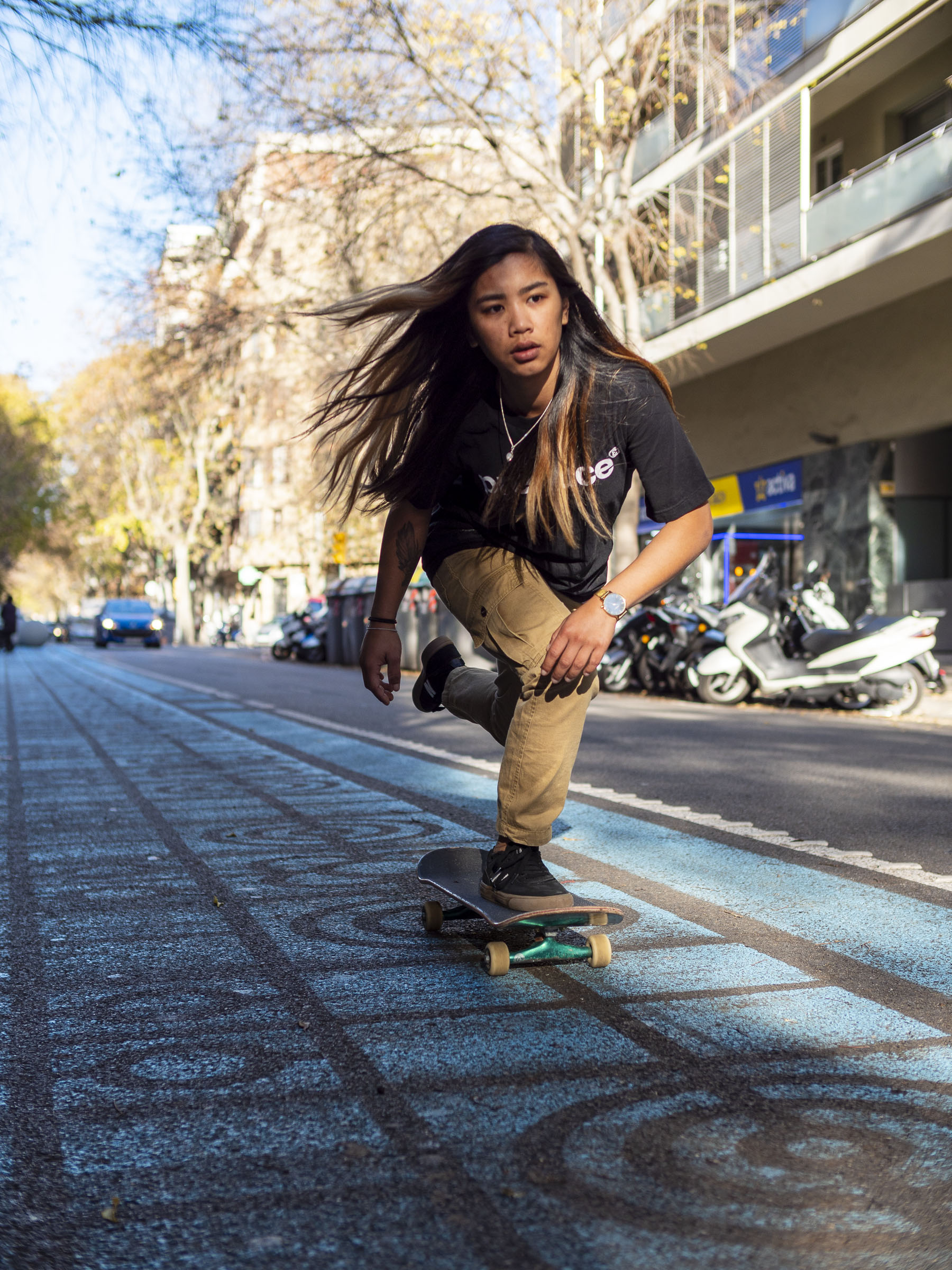 Tell us your name.

How long have you been skating?

Where are you at right now?

I live in Belgium, but I'm in Barcelona.

What are you doing in Barcelona?

I'm filming for the Preduce video.

So Preduce is one of your sponsors? Who else do you have?

So, tell me about how long have you been skating and how you started?

How old were you then? 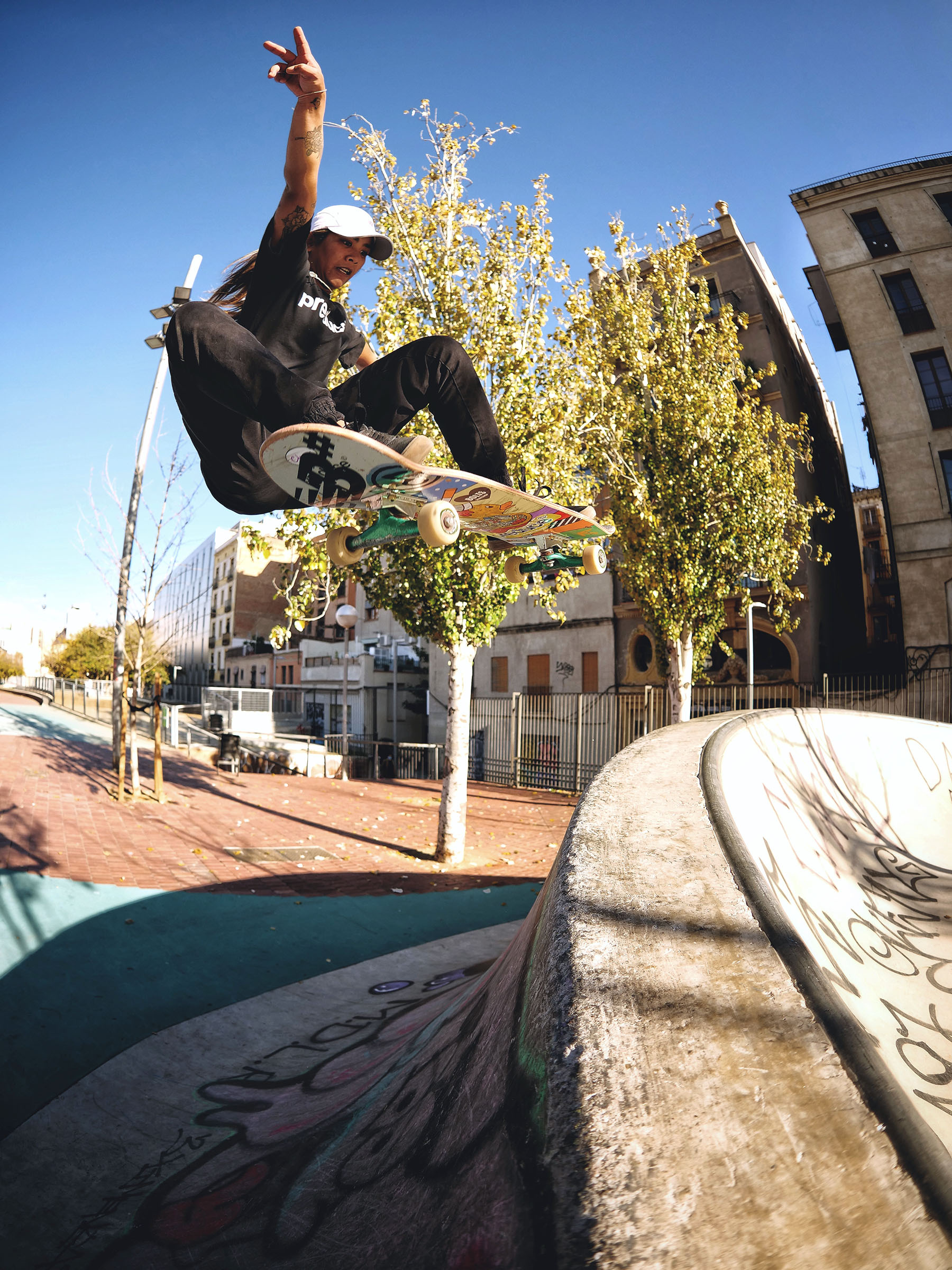 So how was... I guess, did you always feel comfortable skateboarding or was it like... I mean, were there any issues from then to now. Not to be cliche or anything but being say a girl skater or even an Asian skater.

Yeah. Like the fact that I'm Asian and living in Belgium that had nothing to do with it. But being the only girl out there, it was kind of hard, which made me stop skating for a couple of years. Other than that, it was just traveling and skating and if you're younger, it's kind of hard to get there. Other than that, not really, I mean.

So now you ride for the Thai national team, right?

How did that happen?

So basically, I wanted to enter the Belgium Championships like two years ago or something, but I wasn't allowed to compete because of my nationality. And that kind of started a story and then all of a sudden Anthony hit me up that the Thai team still needs a girl. And yeah, one week later I was in Thailand.

So, you’re on the Thai team, started going to contests and now have a World Ranking. Kind of explain that as if I don't know anything about it. How do you get from living in Belgium, not riding for anything and then to being internationally ranked? How did that happen?

Yeah, I guess so. I mean, I love skateboarding and I would never stop skating. There's just luck and people and I don't know. Yeah, that's it, right?

Okay. So where were some of the contests you went to?

The first one I ever skated was in Rio de Janeiro, I think 2018. Then we went from Rio back to Thailand, we did London, Dew Tour in LA, and then another one in LA. We went to China as well, back to Sao Paulo, back to Rio de Janeiro, and then the last one was Singapore, but that got canceled the night before.

You also competed in the Southeast Asian Games, right? In the Philippines?

Yeah, I was at the Southeast Asia Games, but I broke my fibula, and it wasn't fun at all. So yeah. I just witnessed the competition. It was kind of fun to watch.

Yeah, it was a hard time being there and then Manila during the SEA games, because I couldn't skate, and it was really... It might be one of the roughest times I had in skateboarding in the past years.

So, do you think that's kind of the whole experience of skateboarding though? Sometimes you're lucky and sometimes you're unlucky. Sometimes you feel good and you skate amazing, you know what I mean? And you're really comfortable and then sometimes you get hurt. I mean I think that's like... It sucks, but it's kind of good in some ways, because it happens to everybody. Every skateboarder kind of goes through that. You know what I mean? And I know the contest is like a little bit... brings everything like to a focus, instead of like everyday skating, you could be hurt one day, "Oh, forget it, whatever. Or I feel really good and whatever." But when it's a contest...It doesn't wait for you- 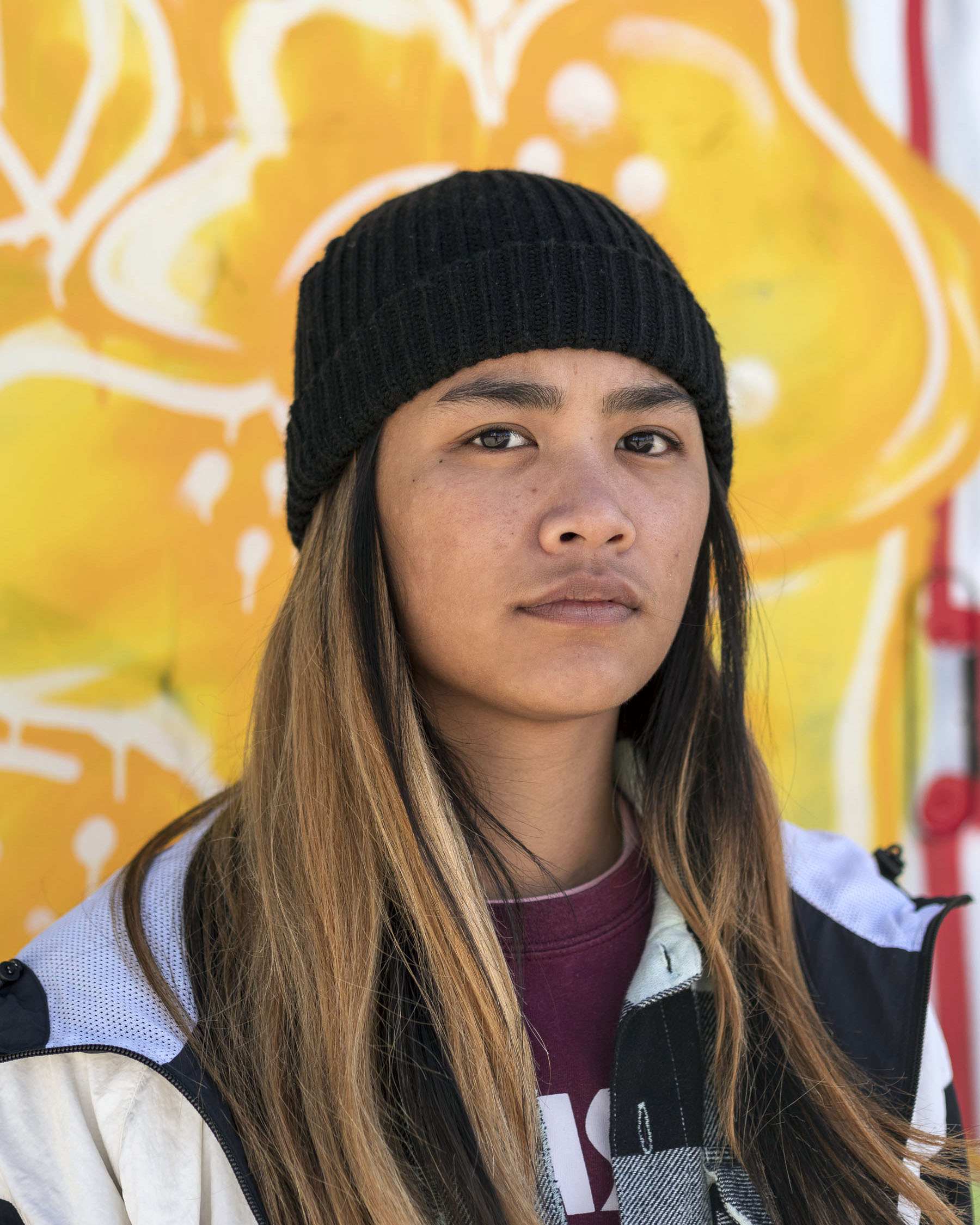 I'm having fun for sure. And it just brings a lot of opportunity for skateboarders all around the world. I think skating being in the Olympics is a good thing. It's a new generation and we just got to accept it as it comes. It's different than skating the streets, but I mean, you got to start somewhere, yeah?

What do you think about like the level of skateboarding that you’ve seen? I mean, did you think after competing in like a Belgium contest that you’d find yourself competing in these global events. I mean, is the level super high, is it intimidating?

Well, I’ve always wanted to go to the Olympics with skateboarding or with another sport I really love to do. I didn't think it was going to be skateboarding, but I have this like small, I'm not saying I'm afraid, but it's like this little thing in my tummy, it goes like, "Oh shit." Like for example, if I made it into the Olympics, because the level is so high, it would be just ridiculous just to make it into the Olympics. Like making top 20 that's doable, but then like performing at the Olympics, there’s millions of people that are going to see the Olympics happening on TV and I'm going to be like, "Shit, what the fuck am I doing here? The level is crazy. Like the girls, I always watched the guy skating on clips and stuff and say, "Fuck yeah, I want to go skate like them boys." But when I see girls it's like, "Oh, shit I can't even do that, but I don't want to skate like that. I still want to skate like the boys and go..." Yeah, I don't know. It's kind of strange, but the level is insane, yeah. It's growing fast.

Yeah. But in the beginning it was like all kinds of easier, because nobody knew my name, nobody knew who I was. And my coach told me in the time, my first competition at Rio like, "All right, doesn't matter if you're invisible now you're going to stay invisible until the day you decide not to be invisible anymore." And I decided to not be invisible anymore when I started this. It was hard to get along with that feeling, I want to be seen and I never used to have that. And now it's kind of like, "I'm just skating." It's cool to meet people from all around the world and get along with the girls, because I never had the chance to skate with girls and stuff. But yeah, it's fun. It's a reason to travel the world and just compete.

I think what you said is really, really interesting. That you're unseen until you decide to be seen. And I get that a lot. I'm filming with a lot of different skaters, a lot of different levels, you know what I mean? And even on this trip, I was like, "Oh yeah, one of the girls at New balance is going to come for a few days to try to film." And then people don't really know. When you meet somebody, you don't know how they skate. It's not until you see them skate and then a switch flips. So, you see somebody skating, you like, "Oh, okay, that's cool. They can skate." Or "Oh, they're learning." Or "Damn they're really good." And it was cool to see you flip that switch for some people on this trip, because they didn't really know, and then they would get hyped on your skating. And so, it's really cool that first reaction. You know what I mean? So, who were some of the skaters that you like to watch? In the whole like Olympic journey?

I especially love the Japanese girls.

Every time I see them skating, they're having so much fun. And it's three girls together, and they’re always going to be together and always going to have fun while skating. Skating this rail together, or that…doesn't matter how big it is as long if they have each other, I like seeing that group of girls on the street course. And that's kind of skateboarding for me. Like getting along with the people, smile, have fun. Mix stories for days and yeah, I really adore the Japanese girls. They're like still so young and just having fun and they're badass. They skate so good, it's crazy and they do it with mad love. You can really tell that when they're skating.

Not cute at all. 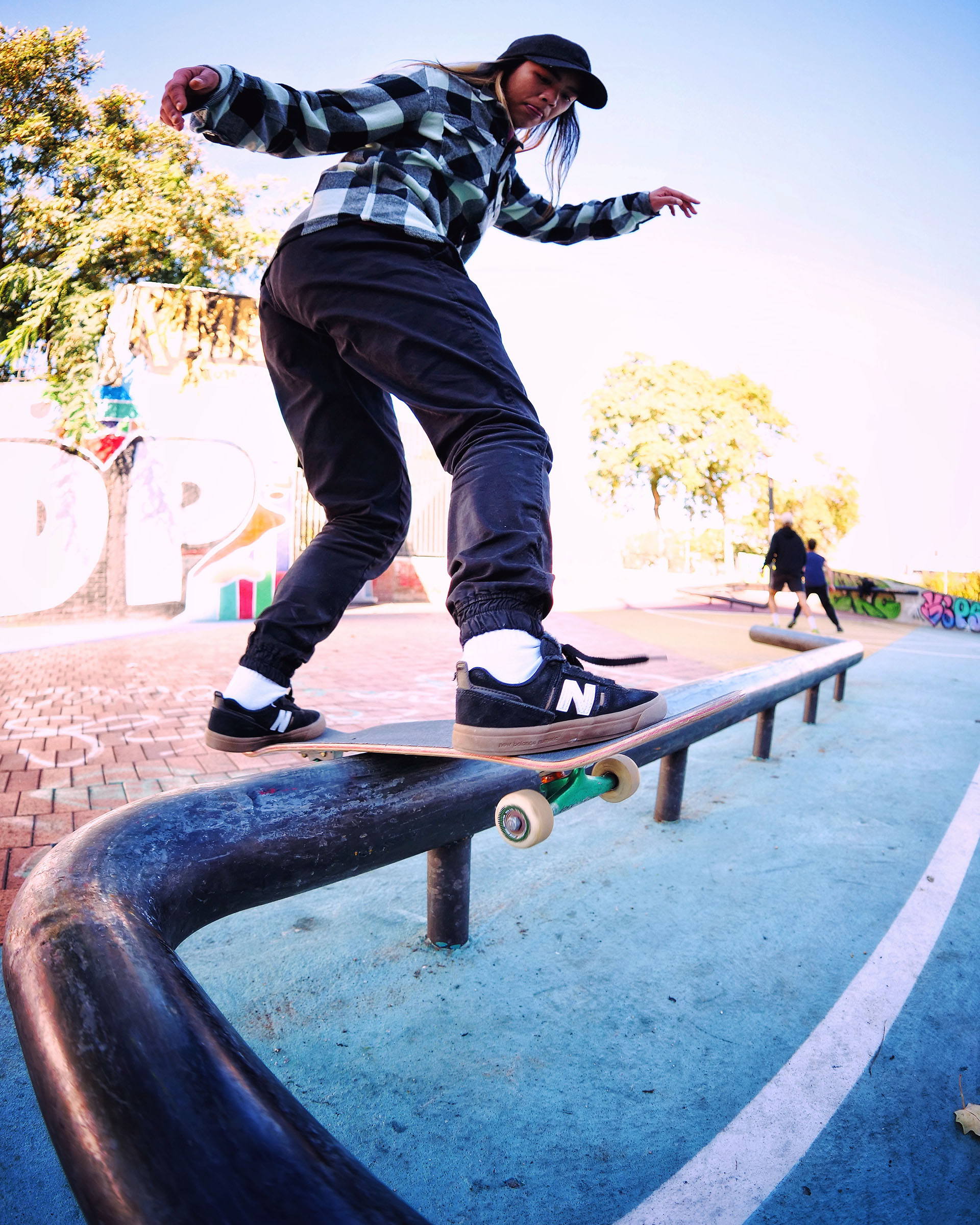 In skateboarding? Well we're starting this skate shop for girls in Belgium, only for girls. I think that's like a major thing in Belgium going on right now, because I always felt when going to a skate shop and you have to buy a board or bearings or whatever, and you walk into the skate shop, that one girl that small, cute girl. And then the guys are looking at you, like "The fuck you are doing here." It always felt like that even though they didn't want to let me feel like that way, but it will always be like that. And yeah, we were starting a skate shop for girls only in Belgium. And I think that's pretty cool.

I want to make a video part for sure. I want to have like one big video part…It would be sick is to show it to your kids one day and just have something that you've been doing your whole life in the streets. I mean, if I need to travel for that, I will. It’s like, I'm not old or anything, but sometimes you just think about the future and like, what if there's going to be a day that I can't skate no more. How’s my income going to be. I'm trying to figure out how it's going to work in the future. But right now it's like, yeah, I want to have a video part and just travel around for a couple of more years, yeah. I should do that.