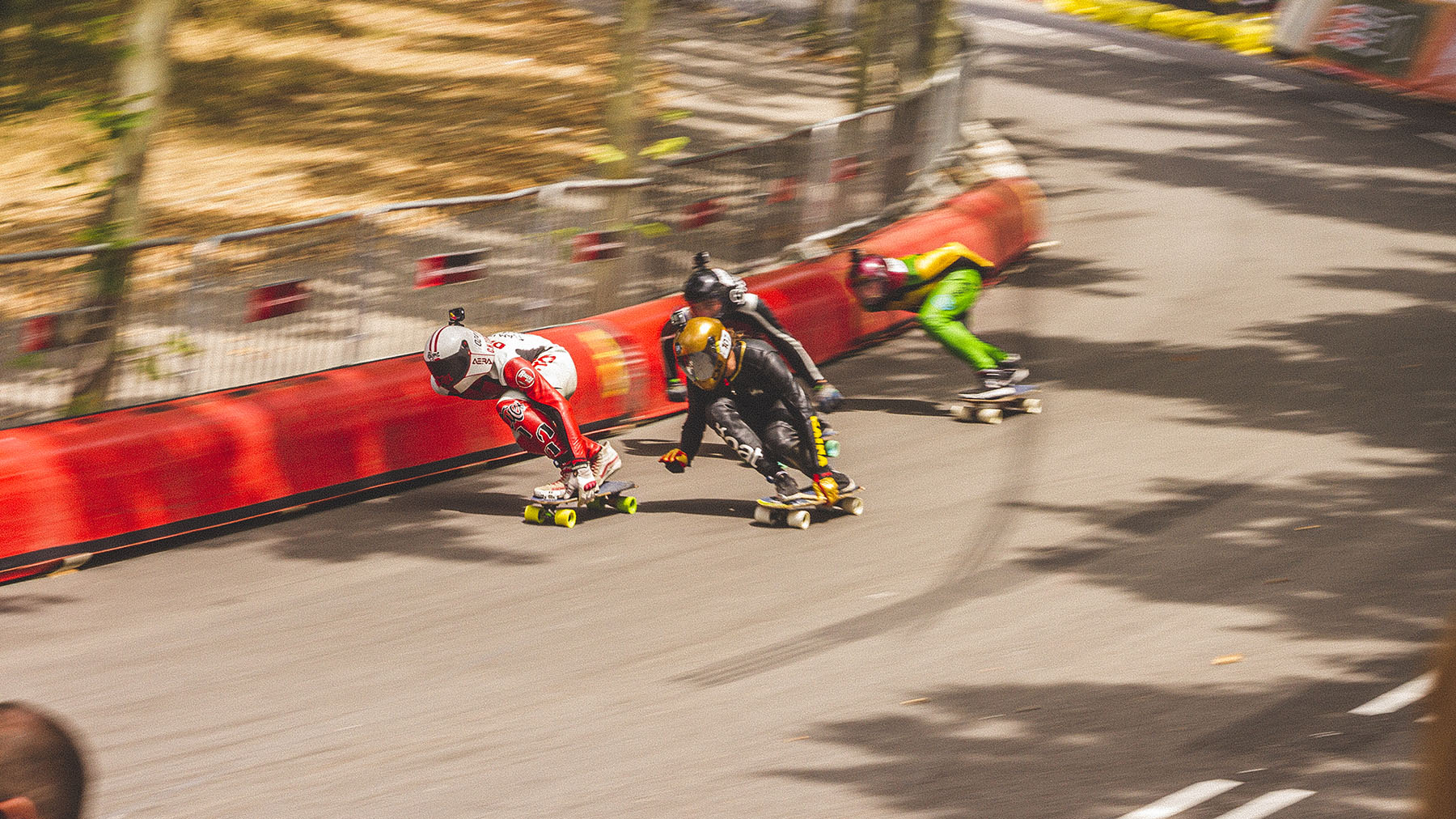 The very core of downhill skateboarding is easy to understand, whoever is fastest down the track wins. With track speeds of up to 100 km/h, speed wins.

Downhill was introduced as a discipline to World Skate with the 2019 World Games in Barcelona. And as the discipline continues to grow, it’s time to introduce the Downhill working group at World Skate.

To learn a little bit more about Downhill skateboarding and the World Skate Downhill Working Group, we sat down with one of it’s members, Federico Barboni, and had him answer a few questions to get us going. 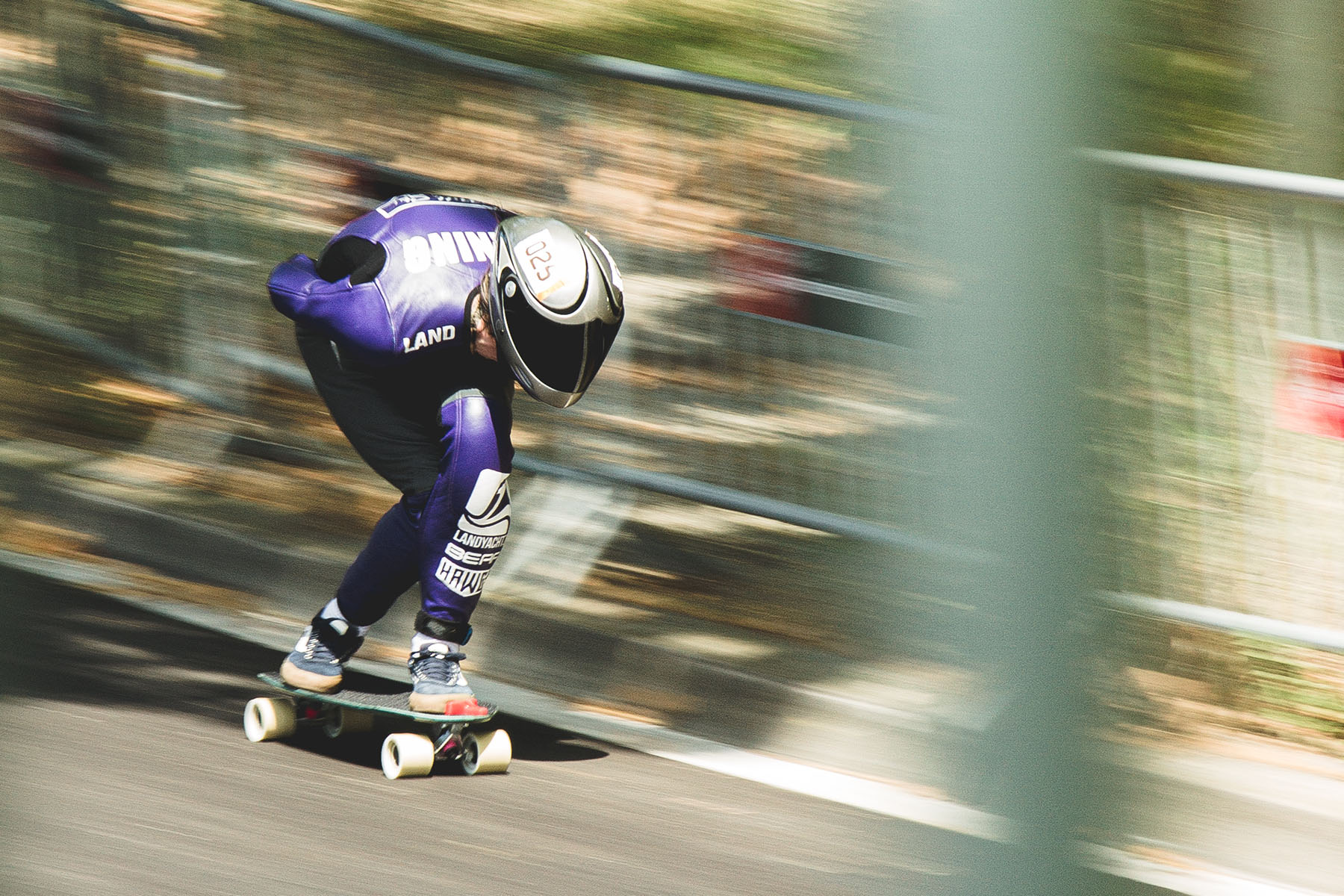 Can you tell us a little bit about the origins of Downhill Skateboarding?

Downhill Skateboarding was born around the 90’s when a company in the US started producing boards longer than the usual skateboard that you would have used in the 80’s. At the same time, with the introduction of new truck geometry (well known as RKP, Reverse Kingpin) the skateboard became more stable, especially at high speed. From there, the attitude of “Hill Bombing” became popular and the X-Games in 1996 took the discipline mainstream. Leveraging on the kickstart from the X-Games, in the following years various associations supported and coordinated the establishment of an international competitive scene.

Tell us a little bit about your history and how you got involved in Downhill?

I got into the world of Downhill around the 2000’s, when my friend showed me a Street Luge; coming from street skateboarding, I didn’t realize immediately what I was going to try, but the passion for adrenaline played a role in that moment. From that time on I started traveling around Italy with my friends to find events where we could ride downhill. In 2004, as I started focusing more and more on Downhill Skateboarding, I realized that an ever-growing number of riders were getting involved with the discipline as well. Foreseeing a national scene ready to bloom, in 2007 I organized the first Italian Championship, a circuit of events that has happened every year since. In 2012 I became Italian Champ and had already begun working as a volunteer with the Italian Governing Body of Skateboarding, developing the Italian Skateboarding Commission within the NGB along with Luca Basilico. While working with the National Federation, in 2016 was asked to run for President at the now dissolved International Downhill Federation (IDF). Following up to that experience and a couple of rough years of COVID Pandemic I am glad that my commitment is alive here at World Skate with the solid DHSB Working Group we just brought together. 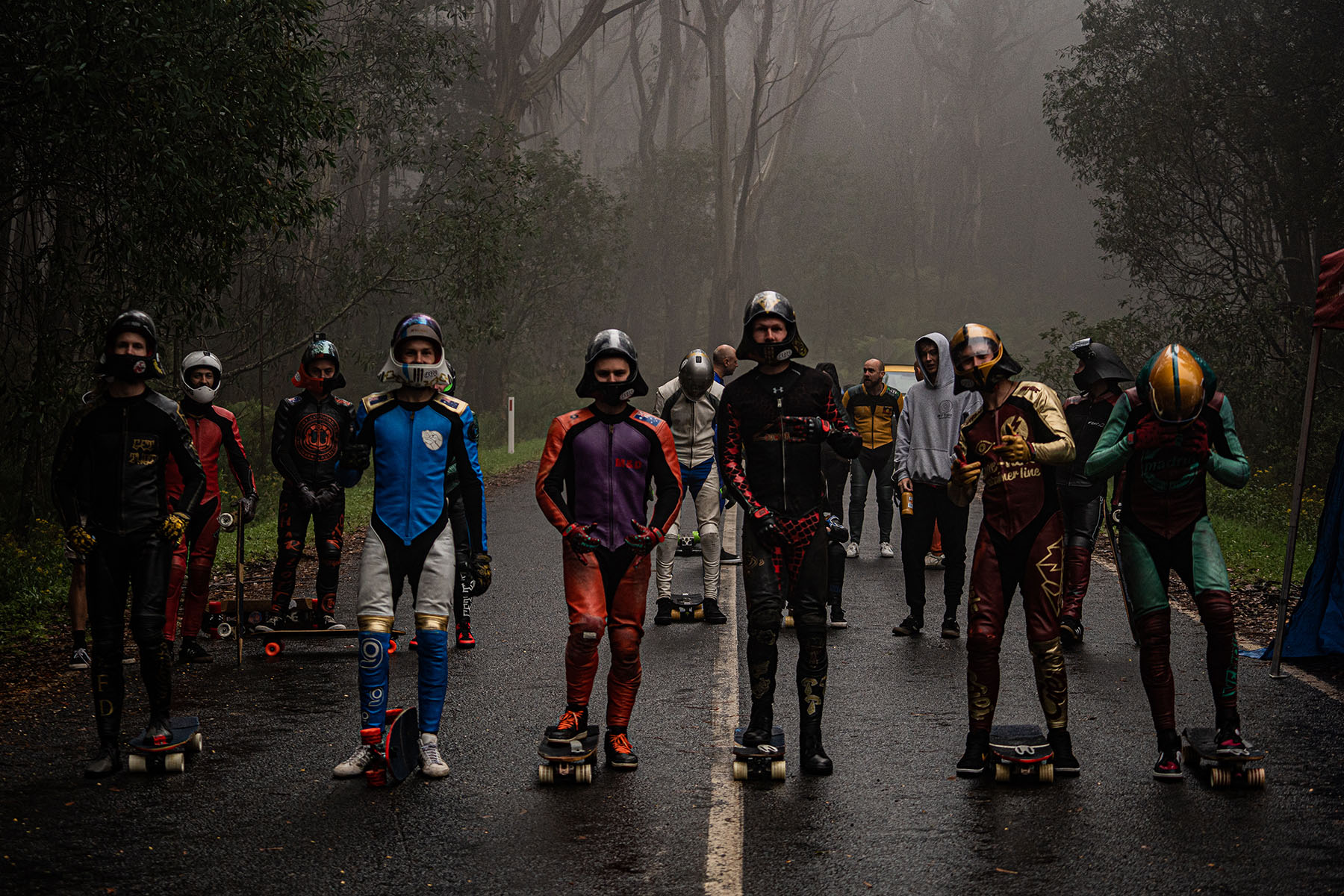 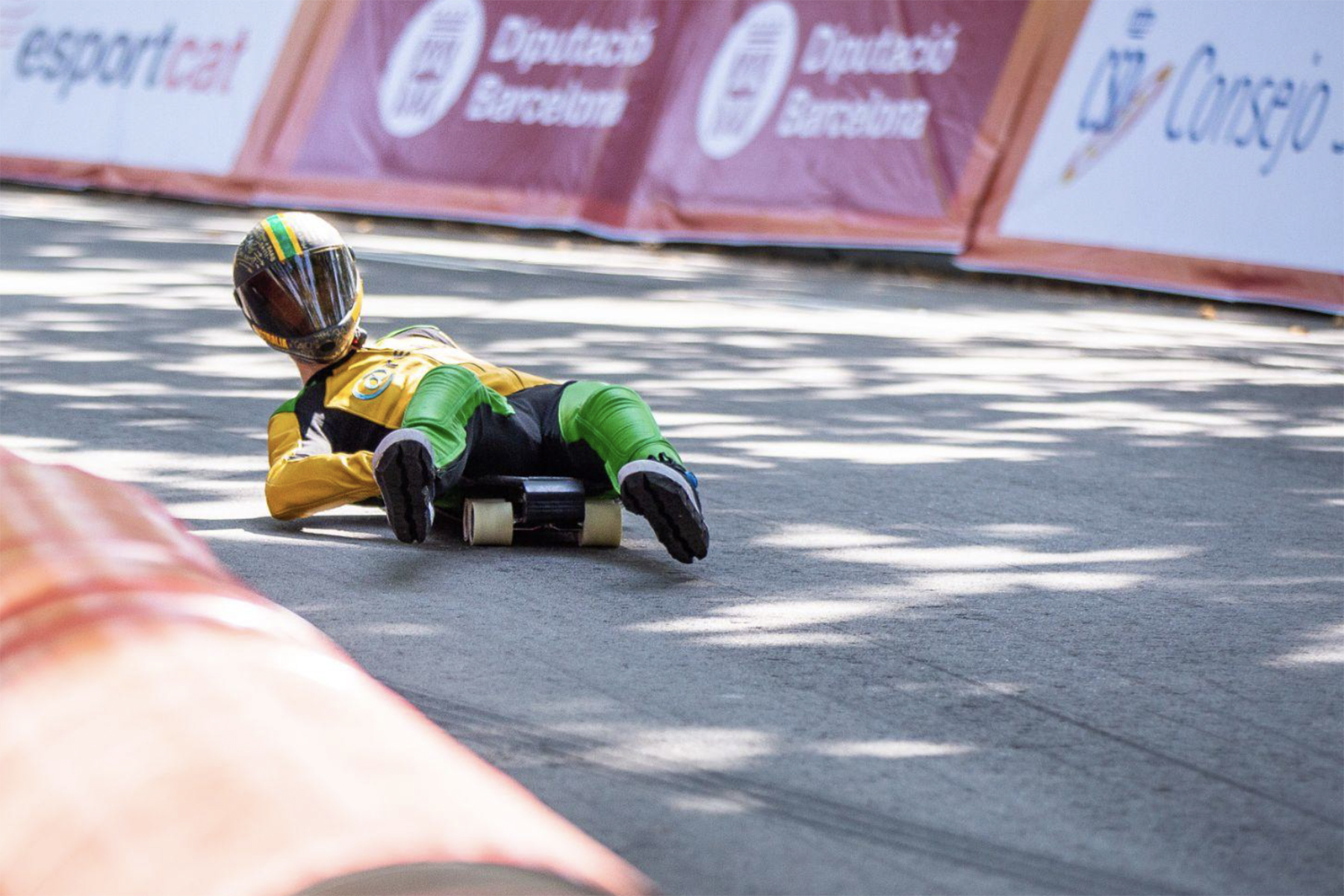 What is the World Skate Downhill Skateboarding Working Group?

The DHSB Working Group is an open group of people with a strong background in the sport, focusing SB Downhill Skateboarding discipline development and progression around the world. Our aim is to foster the growth of the Downhill Skateboarding community through WSK recognized National Federations and to develop professional opportunities for Athletes and Organizers around the globe. After many years, we are finally under the same umbrella of Skateboarding and have the opportunity to grow as a professional sport within an IOC recognized Governing Body. The goal that we have been hunting for many decades has been reached and we’re excited to keep the work done. For Downhill Skateboarding to be a part of an Olympic International Federation it unlocks a whole new set of unprecedented opportunities for the sport. The goals we set up start from developing the sport’s global participation, building an international ranking accepted by every National Olympic Committee, progressively introducing DHSB to Olympic cycle events (continental Olympics I.E.) and eventually the Summer Olympics.

At the moment the ones who are involved in the adventure are:

The working group it’s basically an open group born from the need to keep supporting Downhill Skateboarding inside World Skate after the recognition of the discipline in 2019, at the World Roller Games in Barcelona. A dedicated group of people who want to develop the discipline and encourage its endless progression. 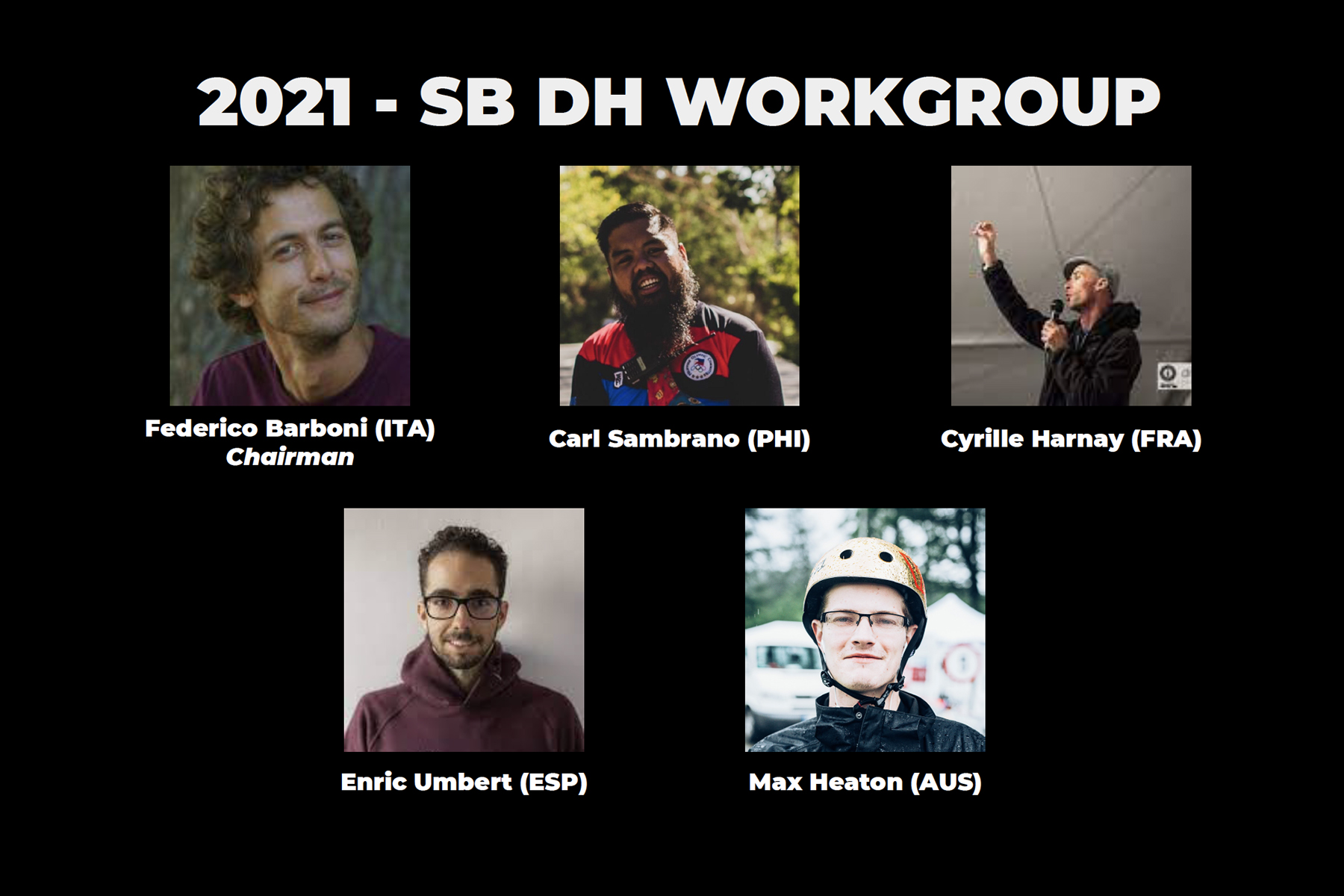 Downhill seems to revolve around events or contests. What’s a typical event or contest like?

Events are key to the Downhill scene. Having events around the world gives the community a chance to grow and the level of racing has increased year by year; at the same time many organizers through the years have become professional in this field; their work kept the community alive and made possible all the world champions that we know. Usually an event is composed of practice on the track, time trials and race brackets, where the riders compete down the road, usually in groups of 4 depending on the wideness of the road, and the first two who cross the finish line advance to the next stage of the race: it’s fairly easy to understand, the faster wins. From the perspective of being an event organizer, this chance to be under World Skate is the beginning of a new chapter, with the clear recognition of the discipline as a sport and riders as athletes. While we’re used to see people racing with longboards down the roads, nowadays the boards are shorter than standard skateboard, with trucks that barely goes over 160mm wide and wheels bigger than 75mm, it’s absolutely an adrenaline rush.

A typical race track it’s usually a road made of asphalt with a length that goes from 1Km to above and can be composed by air pins, sweepers and fast straight sections. The track is commonly protected on both sides by hay bales or ski protections to avoid collision with guardrails or any obstacle on the road’s sides. The skaters can reach speeds that go from 60km/h to over 100Km/h depending on the steepness of the road, that usually can be between 7-20% of steepness. The more challenging it is, the more interesting it is, as it always has been.

Those are challenging speeds.

In the last years, the hunting for speed has become a way to discover new roads around the world. From the beginning speed has been the key factor for rising the level of competition: Teutonia in Brazil, Transylvania in Romania, Killington in Vermont are the fastest roads where we’ve already had international competitions and I’m looking forward to discover new amazing places to skate around the World.

What’s the goal of the working group and the future of downhill at World Skate?

Community growth is a must, and as I’ve said we have many goals for the future that we’d like to reach. From having a solid network of events, a professional judges pool in every continent in order to cover all the competitions around the World, and having a valuable international ranking for every nation. World Cup and World Skate Games are on the list of the things along with the Olympic cycles. If you are interested about Downhill Skateboarding and Street Luge we will be hosting webinars in the future where all the National Federations and Organizers will be invited to know more about the plans for Downhill Skateboarding in 2022 and the future. Soon we will also open, for the first time with World Skate, the candidature for 2022 Downhill events so, get ready to see some action next year. With the announcement of this Downhill Working Group, we would also like to announce that candidature for 2022 events is now open, if you're interested in submiting for an event next year, feel free to write us at Questo indirizzo email è protetto dagli spambots. È necessario abilitare JavaScript per vederlo.. 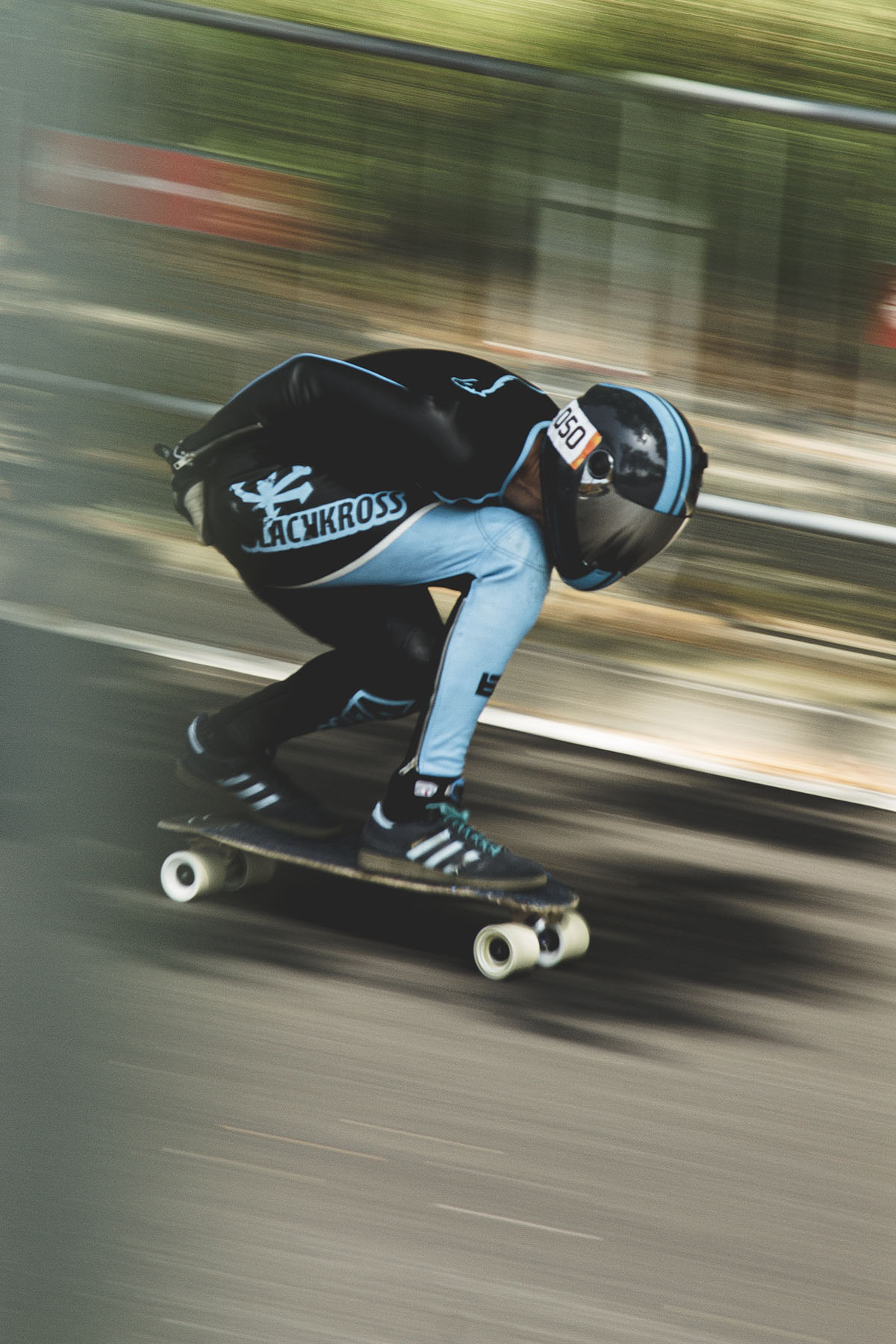