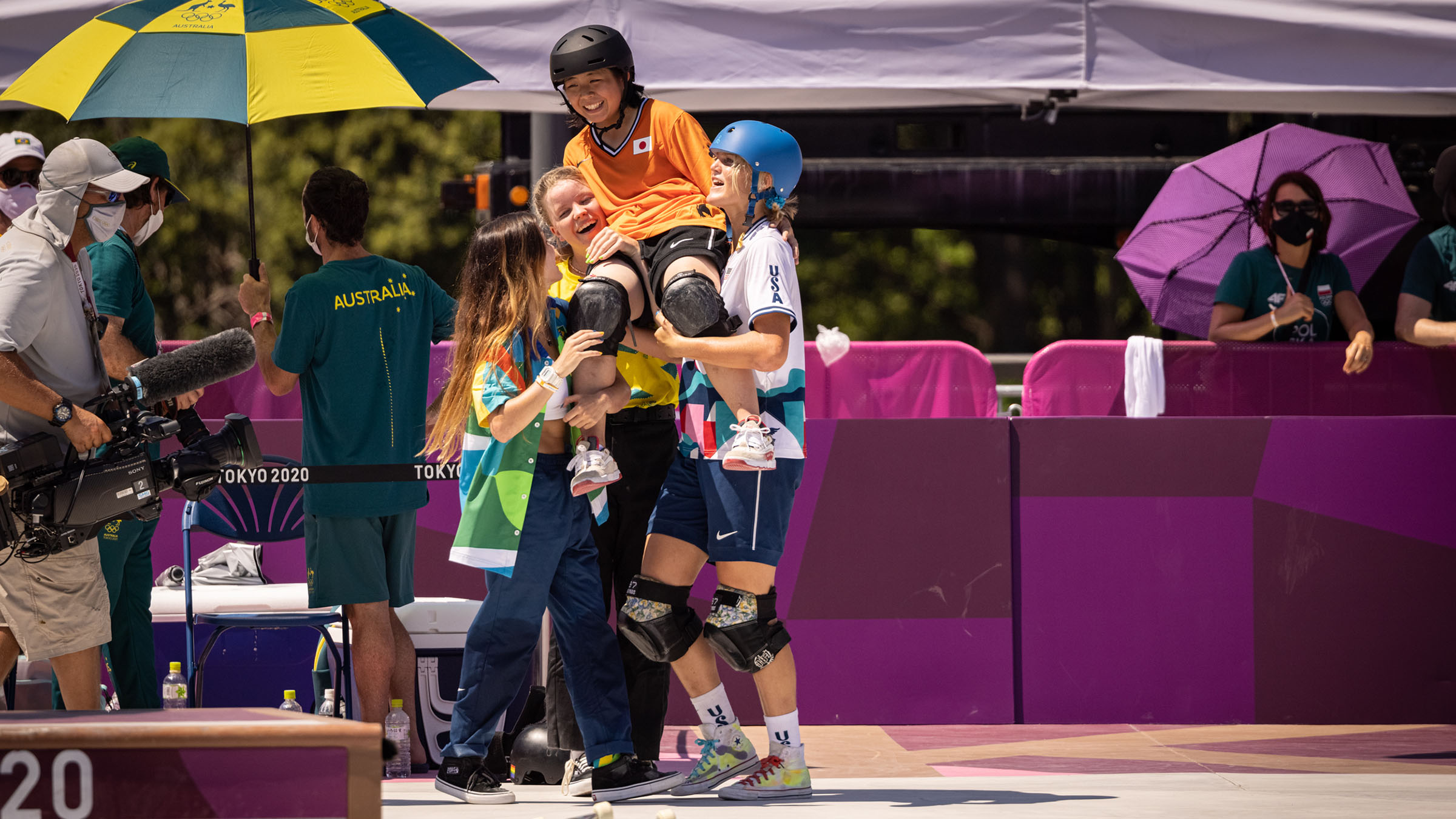 In what was certainly the defining moment of the skateboarding event if not indeed the entire Tokyo 2021 Olympic Games, Misugu Okamoto’s very public heartbreak and emotional rescue by her competitors after watching her dreams shatter on the hot concrete floor of the Ariake Urban Sports Park has been recognised with the Tokyo 2020 Fair Play Award.

For the purposes of context: despite skateboarding’s noisy and internally controversial debut on the Olympic stage every single skater in the world and many more action sports enthusiasts and armchair curio’s watched the four skate events with rapt attention. Women’s skateboarding has forever changed the cultural esprit de corps of an activity in which battles for consensus over what constitutes legitimacy has become a leitmotif. Even the most cynical of observers couldn’t fail to recognise that here, in Tokyo, with a field of 8 women- some playing ukuleles and with multicoloured fingernails- something was happening in which skateboarding was being led back to its own roots in front of the world’s gaze.

Late in the event and almost out of nowhere, what should have been a collective victory suddenly took a very human turn as personal heartbreak struck in the closing stages of the best-ever women’s skate contest, bar none.

The largely-unheralded 15-year-old Japanese girl Misugu Okamoto had barged her way to first place position in the qualification round and knew that in order not only to podium but to complete a domestic clean sweep, all she had to do was hold on to the one trick which she had been working on incessantly- but which had hitherto denied her on her first two runs.

They say the mind has its mountains and as every skateboarder knows, the reason why you can’t recreate every trick you already have on demand is largely mental. Misugu’s high-scoring kickflip indy transfer slipped from her grasp and with it her dreams and the undeniable pressure of expectation from a sport-mad host nation.

Perhaps as yet too unworldly to have grasped the benefits of appearing stoic in disappointment, she folded onto the merciless surface of the concrete park bereft and inconsolable. Suddenly it was all very serious. And then a remarkable thing happened: the rest of the finalist field gathered her up and hoisted her aloft, rescuing an awful situation in an unforgettable act of skaterly sisterhood. Beaming through her tears, Misugu was carried through her darkest moment by the energy that brought her there. All the light and darkness and colour of humanity in one unforgettable skateboarding moment.

Misugu’s seven competitors have collectively been awarded the Tokyo 2020 Fair Play Award by the IOC- Yndiara Asp, Bryce Wettstein, Dora Varella, Poppy Olsen, Sky Brown, Kokona Hiraki and Sakura Yosozumi were collectively commended by the IOC for their spontaneous act of putting the rad into camaraderie. IOC President Thomas Bach announced the award by noting: “The fair play prize is well deserved. Sport is about more than just competition. This is what we have seen at the Olympic Games Tokyo 2020.” Women’s skateboarding has taught skateboarding something about itself, and then taught the world something about skateboarding in Tokyo 2022. We would like to add our congratulations to those seven very deserving winners here!