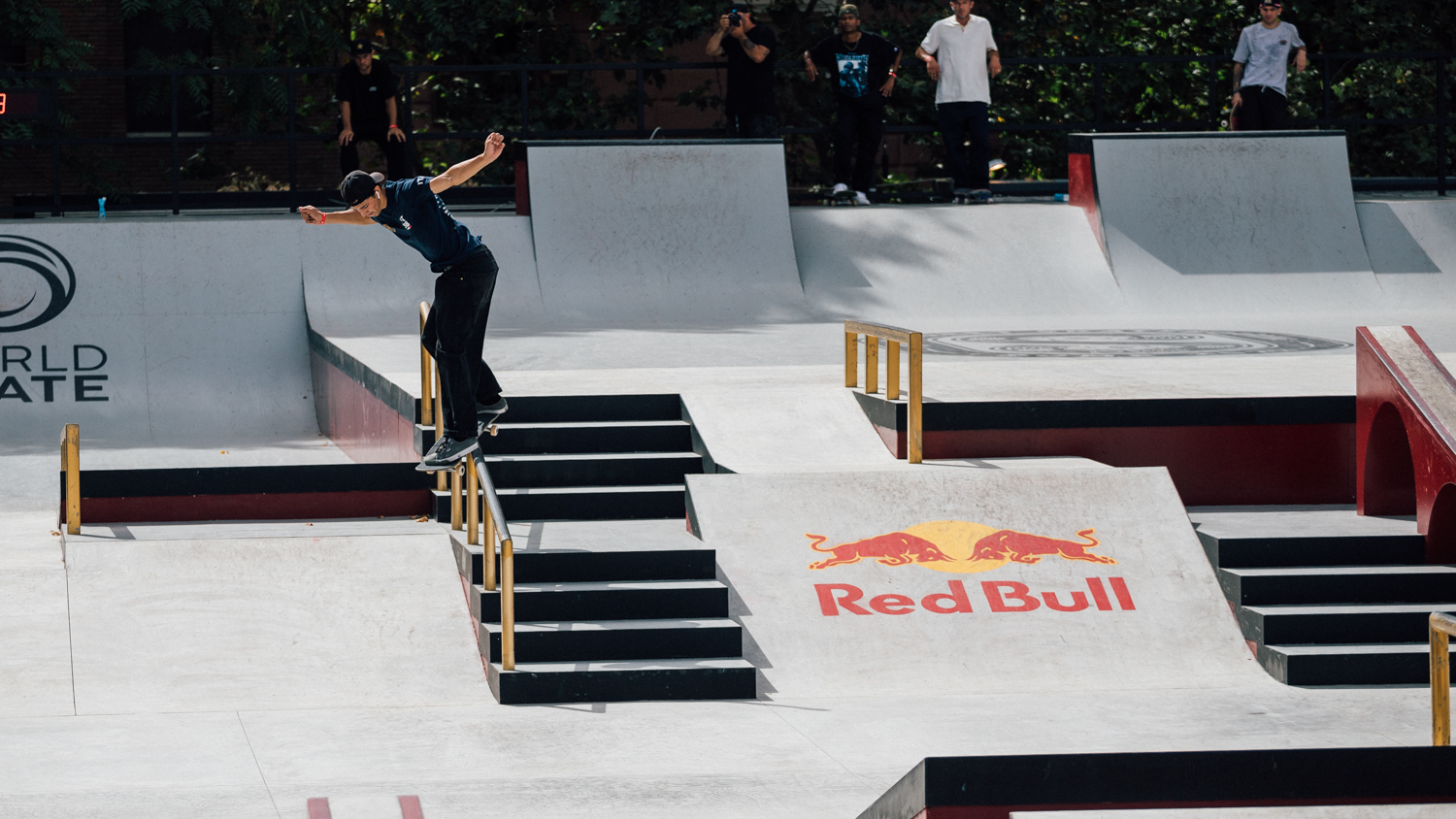 Friday in Rome saw some much- appreciated respite from the solar punishment that constituted Italy’s experience of the European heatwave of late June 2022.

With some Cirrus cloud cover and even a repeat of 2021’s unexpected rain break, the Colle Oppio park which plays host to the World Street Skateboarding Rome contest began to breathe a little, and so could the 64 remaining skaters who had made it this far through yesterday’s qualifiers.

From today’s Quarter-Finals on both fields will halve daily, meaning 32 of the 64 Men and Women who competed today will progress, and the other half will watch the weekend’s action from the bleachers. Cruel, but such is the nature of competitive skateboarding. The Quarter-Finals repeat the qualification format of a couple of 45-second runs each, with the better run counting as the athlete’s final score.

The day’s first shockwave was felt instantly as the news of top-ranked female skater Aori Nishimura’s withdrawal from the event, the ripples of which were felt almost immediately as an assumed shoo-in for the finals had suddenly vacated that podium spot meaning that although the Japanese contingent had lost one of their strongest weapons, there was suddenly an extra place to play for.

China’s Wenhui ‘Zoe’ Zeng galvanised her consistency despite being patched up from a niggling and largely untreatable heel bruise to nail a run-ending backside kickflip which saw her into the final 16 with which she was understandably happy. Positions 15 and 14 were held by Japanese duo Nonoka Nakajima and Yumeka Oda who had enough contest smarts to throw down hard enough to qualify but still leave gas in the tank for the two bigger mountains that remain to climb for them in the Semi-Finals and Finals yet to come.

Dutch sensation Keet Oldenbeuving is one of the few European women who can be considered money in the bank at this level and impressive as she always is, it will be interesting to see what best tricks she has up her sleeve when tomorrow’s format shift affords her the opportunity to wild out against the Olympians that lie ahead of here in the leaderboard.

Unlike her neighbours in the Netherlands, Belgium’s Lore Bruggeman is her nation’s sole representative at this level but she has taken a leaf out of Roos Zwetsloot’s book and is much improved and more aggressive than we have seen from her up until now and deservedly made the cut.

11th- placed Miyu Ito of Japan didn’t have the second run she might have hoped for but in the end didn’t need it because her banked 62.29 first run already put her fully 8 points off the danger zone.

Whether she has the trick repertoire to make the top 8 remains to be seen, but for now she lives to regroup and fight another day.

Brazilian newcomer Gabi Mazetto is arguably the most watchable skater in her division; stylish, fearless and with a pop like a nailgun, her boned backside ollies bear all the hallmarks of a future great and she seems assured of a big future in skateboarding both within Brazil and beyond. A deserved 10th place was hers based on a second run which made up for a broken first one.

Positions 8 and 9 again belonged to a Japanese pairing who again both did enough in their first runs to break the magic 70- point mark which at this level all but assures progress to the next round. Aoi Uemura is certainly going to be a future great but Coco Yoshizawa edged her out to take 8th place courtesy of her powerful backside lipslides on the long round rail which require not just strength but cat-like balance to pull off. Great to watch.

Tellingly, everyone from positions 9 and above scored over 70 with their first runs, which demonstrates just how much you need to come out swinging at this level in order to rise to the highest echelons. Current world number one Pamela Rosa was no exception, and after a subdued Olympics skated like she had something to prove. One of only half a dozen females from around the world who can really mix it with the Japanese, her crooked grind on the hubba ledge as her first trick set the tempo for a run which squeezed 7 solid tricks into 45 seconds and sent a message that she is here to take names and wreck games.

Sixth place would go to diminutive Australian newcomer Chloe Covell who at just 12 years old was one of only four skaters to score over 70 with each run, which speaks to an alarming consistency and time on her side. Fifth place went to the excitingly creative Rizu ‘Liz’ Akama who threw lesser-spotted Barley grinds and bigspins into her runs, marking a departure from the occasionally conservative trick selection of her compatriots.

Fifth place went to crowd favourite Rayssa Leal who opened her account with a fat backside lipslide as a statement of intent and went on to back smith the hubba ledge, making her the only female to do that so far this week. Worryingly, she took a heavy slam to her shoulder on her second run, but seemed well enough to throw in a few crowd- pleasing tricks as the time ran down on what was in any case a throwaway run.

Third place went to Roos Zwetsloot from the Netherlands, who is quickly establishing herself as heir to Leticia Bufoni’s crown as the female skater most respected within the wider skateboarding world for her sheer gnarliness. Frontside 5-0 on the hubba and a ridiculous heelflip to frontside boardslide brought the crowd to their feet to celebrate the best female skater in Europe right now.

Second place went to Olympic gold medalist Momiji Nishiya who has the crispest technique in the whole female field right now and gapped out to frontside feeble the entire long railing like it was no big thing. Momiji was pipped into second by fellow Japanese medalist Funa Nakayama who had her seven-trick run dialled in and set the pace right out of the gate with an 83.45 that nobody could better and which showed an overall ability improvement from a Tokyo bronze which leaned heavily on best tricks. The women’s semi-finals promise to be a slaughterhouse tomorrow.

The Men’s contest benefitted more than the women’s from the draconian qualifier cuts, reducing as it did the field to a quarter of its original size.

Just above him was the exquisitely featherlight touch of Aoki Yukito, who has the ability to stand out in a crowded field through the sheer effortlessness of his technique.

Fourteenth place went to American Jake Ilardi, a superb all around skater who can McTwist as well as he can kickflip backtail. With consistency to spare, he was all but nailed on to make the cut, and did so with style to spare.

Brazil’s Gabryel Aguilar held thirteenth above Ilardi, fast and courageous with original tricks like half cab to 5-0 grind on the big centrepiece hubba ledge. Above him lay Canadian veteran Ryan Decenzo, who remarkably seems to be getting better as time goes on: kickflip nosebluntslide on the hubba was probably the trick of the day and the crowd responded accordingly.

Argentina’s Mattias Dell Olio made the cut in 12th place witha consistency that matched Kelvin Hoefler’s, and a mighty 360 flip noseslide on the hubba which brought a roar from the Colle Oppio crowd.

Tokyo gold medalist Yuto Horigome was a surprise 11th place but will come into his own in the best trick section tomorrow and seems likely to be favourite to win based on his current faultless form.

Australia’s Shane O’Neill is one of the biggest names in skateboarding today and is only ever really  competing with himself since his trick bag is beyond the reach of most mortals other than himself.

The best switch 360 kickflip in the world all but guarantees high scores, and although his second run crumbled, he is a tantalising prospect for the finals.

Eighth place went to Brazilian Olympian Kelvin Hoefler who is so consistent he is hard to beat, and smooth for a big lad. Comfortably on to the next phase it remains to be seen what best tricks he has to unleash come tomorrow and beyond.

France’s beloved Vincent Milou stepped it up a gear from qualifiers, using the big contest experience that tells him when to blast kickflips into lipslides here others would not risk such a huge make-or-break commitment.

Portuguese technician Gustavo Ribeiro merited his top 5 seeding by putting his machine-like consistency to good use in an elimination round that rewards a methodical approach: as a lover of pressure situations, he was in his element.

Era- dominating skater Nyjah Huston is the only skateboarder with the hunger to produce magic out of thin air when the cards are stacked against him, and a half cab kickflip to backside 50-50 on the hubba ledge is the sort of skateboarding gold only he can deliver. That trick alone was enough to ensure he would progress, and it is doubtful if anyone else could replicate it.

Argentina’s Mauro Iglesias has been the other big head turner of the week, on a rocket ride of progress that has shaken up the leaderboard and announced the arrival of a new talent which is no respecter of his peer’s profiles or sponsorship deals. He could prove the upsetter going into Sunday on current form.

The ever- likeable Canadian Micky Papa shot into second place with a faultless first run that brought rapturous applause from the audience and signalled a skater in finely-tuned harmony with his board. When your first trick is the treacherous kickflip frontside 50-50, you know that this is a skateboarder brimming with confidence and poise. He is having the time of his life here, and the public are feeding off it.

First place however goes to France’s peerless Aurelien Giraud, who seems to have shaken off the contest bad luck which saw him break three boards at one event. He is here to win, he is going bigger than ever, and when you end a run with a hardflip late kickflip down the biggest gap in the park, you are saying something loud and clear.

Roll on tomorrow, and pray for just a little cloud.