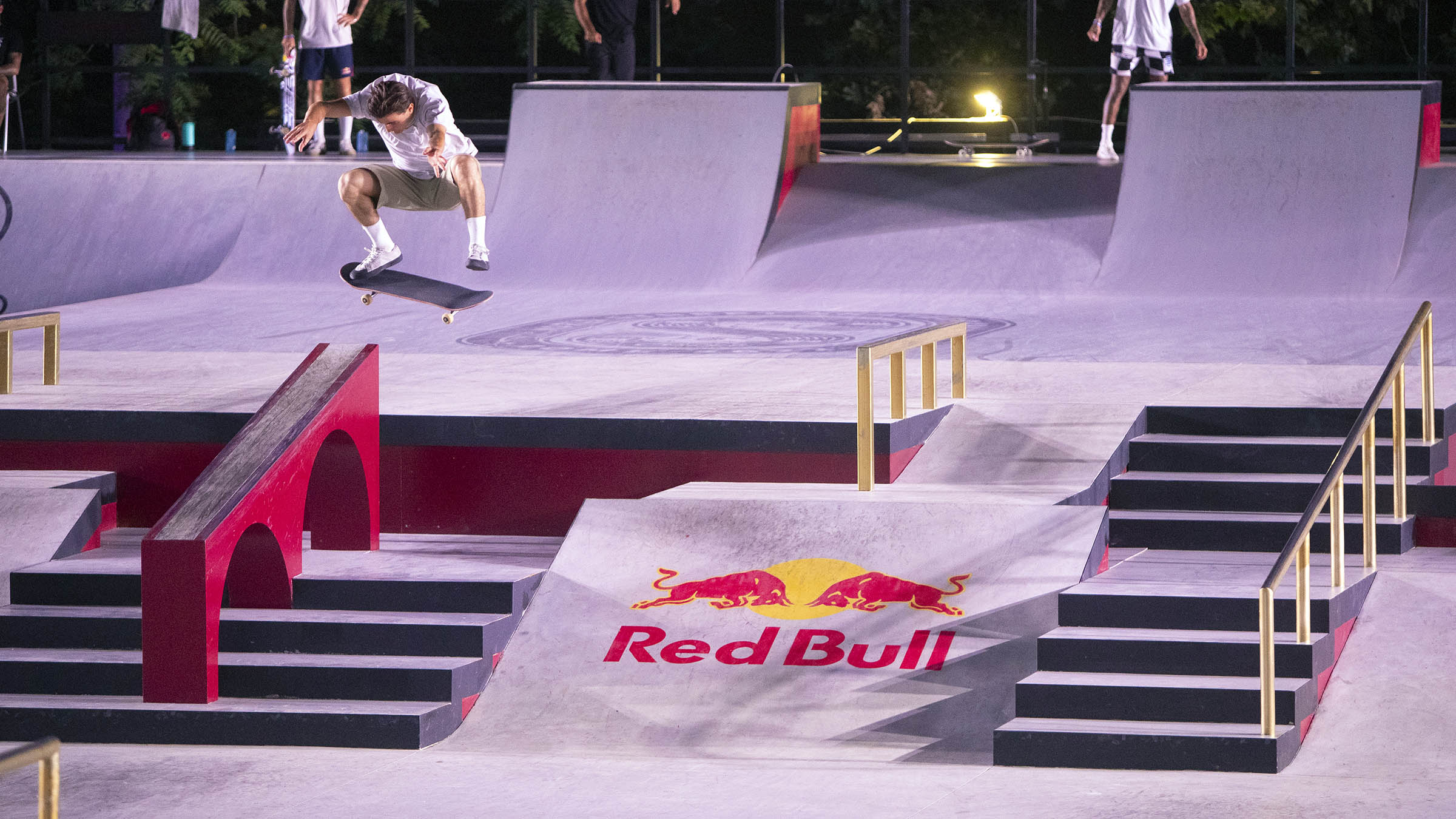 The first thing which became evident on Saturday morning was that the early predictions of the heatwave in Rome lifting had proven premature: it was an absolute scorcher once again, possibly the hottest day of this intense skateboarding week so far.

As well as this Semi Final representing the second phase in the cruel splicing of the remaining field in half, it also ushered in the Best Trick dimension of the contest format which brings a new dimension of excitement to proceedings, since it means that the relative safety of the run format can no longer be played.

To elucidate briefly: on top of the twin 45-second run format of previous rounds, now each of the 16 entrants in each field had 5 attempts to wow the judges with standalone tricks which could leapfrog successful skaters up the leaderboard by degrees of magnitude which conservative runs could not.

The scoring system from here on in combines the athlete’s highest-scoring run of the day with their two highest scoring best tricks, all three of which are given an equal point weighting of a possible 100 up to a theoretical 300. This has the effect of weighing consistency with the explosive ability to create magic out of thin air, and this new energy was reflected in the crowd response which built in rapturous waves as the day wound on and the stakes increased.

The women’s field drew the solar short straw by being up first, and the immediate talking point was the arrival on the international scene of Australian youngster Chloe Covell. Most young skaters stay away from switchstance tricks because it is like learning to play golf left-handed; but this 12 year old enthusiast has already set down heavy markers in a division where teenagers dominate- and although she qualified 8th, she will have her competitors worried come Sunday. Think about that for a second.

Qualifying one position above her was top-ranking Brazilian Pamela Rosa who, as we said yesterday, is skating like she has something to prove and although the narrative arc of women’s skateboarding has been the tyranny of youth, there lies beneath her smiles a suggestion that she may just remind everyone who’s boss tomorrow.

Sixth- placed Yumeka Oda is part of Japan’s second teenage wave of upsetters in female skateboarding and although she may have a lower profile than her Olympian countrywomen, she has frighteningly precise technique, a sensationally sharp kickflip, and may be a stealth challenger for a podium spot come Sunday. Remember the name.

Above her in the final standings lay Momiji Nishiya, the most impressive Japanese female skater of the Tokyo Games overall and a pacesetter here in Rome; although three of her Japanese crew may have placed above her here today you can’t help feeling that her talent is the one which may yet express itself in a way which will prove domineering either here or in Brazil. She is a definite podium contender despite progressing here outside her usual spot in the top 3.

Coco Yoshizawa represents the unknown quantity in the Japanese skate contingent here- in as much as she may not yet possess the power of some of the other women- but, as a final best trick score of more than 86 out of a possible 100 despite 3 previous bails suggests, you would be foolish to discount her.

Qualifying in third was Rizu Akama, or Liz, as she is known; more aggressive than you might imagine coming from a skateboarding tradition in which precision is favoured, she nonetheless scored in 6 of 7 rounds of skating- more than anyone else including those who qualified above her.

That nexus of strength and determination marks her out in a field which is already crammed with good skaters.

If she was suffering from a heavy shoulder slam yesterday it didn’t show. Backside tailslides on hubba ledges by teenage girls are unprecedented in a culture already well explored in terms of pioneering youth, and you can’t help but feel the energy of a skateboarding nation willing her on.

It may well take a lot to break through the methodical Japanese approach, but this is the girl to do it.

First place qualifier for Sunday’s final is Olympic gold medalist Funa Nakayama, who herself barged to the top of skateboarding’s public consciousness in Tokyo and shows no signs of relinquishing that position. The only female skater in Rome to break the 90 point barrier on a single trick, and possessor of the best frontside crooked grind this side of Jamie Foy, Funa Nakayama has usurped her better-known countrywomen to become the girl to beat in competitive female skateboarding: bring on Sunday.

The later start of Saturday’s action meant that the men’s division benefited from the presence of superb artificial lighting which allowed their Semi Final to run late into Saturday night. It is fair to say that with the heat of the day abating, the conditions were nothing short of gorgeous. Balmy, comfortable temperatures were a blessed relief which meant that the tempo and atmosphere really started to crank up.

The Colle Oppio park was packed by this point and the intensity of the event really began to manifest itself.

In an electric atmosphere, Ryan Decenzo remarkably managed to repeat the once- in- a- lifetime feat of landing a kickflip nosebluntslide on a hubba ledge: a trick so difficult that you don’t even see it being done on kerbs in video parts. He was a deserved 8th place and the finals will be better for him being there.

Qualifying a single position above him was the powerful, rangy Frenchman Vincent Milou- a skateboarder much loved because contests are not his natural habitat but instead something which he has turned his natural ability to. Although he is unlikely to win against thoroughbred contest skaters on Sunday, he has done magnificently to mix it with those who specialise.

Coming in just a single position above Milou was his fellow Frenchman Aurelien Giraud, a skateboarder who has found his groove right now. Faster, looser and more powerful than the rest of the field, if he avoids bad luck and wheelbite on Sunday he will be unbeatable.

In fifth place came Matias Dell Olio, the only skater from the men’s field to endure the punishing midday sun to practice and who accordingly reaped the benefits. His 360 kickflip noseslide to shove it out on the hubba ledge brought the crowd to its feet and assured him a place in the finals.

Fourth place fell to the story of the men’s division: Argentinian unknown Mauro Iglesias arrived in Rome devoid of any meaningful sponsorship and threatens to upset the skateboarding establishment applecart with a podium finish- if you ever doubted that Olympic skateboarding could be a field of dreams, ask this guy. Every skateboarder in the world will be rooting for him.

At the business end of the rankings we find Olympic gold medalist Yuto Horigome in third place. Put simply, he can do things that nobody else save perhaps Sora Shirai can, and he has the high- stakes minerals to deliver when he needs to. Uncharacteristically, he blew out 3 best trick attempts- but all he needed to do was qualify for the finals and he has now done so. Sunday will tell its own story there.

Above Yuto lay the other two usual suspects of competitive skateboarding: in second, Nyjah Huston who twice laid down nollie Spanish grinds on the hubba in between other people’s attempts- and who himself landed half cab smith grind backside 180 out to fakie, which is on the outside edge of skateboarding possibility. In first, Portugal’s Gustavo Ribeiro, a student of the game who has studied his rivals and knows how to strike like an assassin. Long story short, he was faultless today and is in the form of his life. He will have to slip up in order to be beaten.

A tantalising Sunday in Rome awaits.